Common but not dull.

There is another product challenging the EXPEDIT & SPONTAN magazine for the "most frequently spotted" title. Many of us have these in our own homes (I have two floor lamps myself). They are inexpensive and yet elegant. They provide soft atmospheric light and are very versatile. I am speak of the ORGEL lamp series.

These simple paper lantern lamps have come in many different styles over the years. I've put together my own little compilation of the ORGEL series including the now discontinued pieces. (Behold my Photoshop skills - click to enlarge) 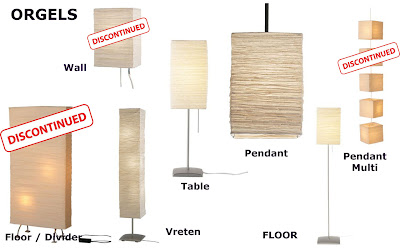 How frequently have I spotted these? How varied are the shows in which have I spotted them? I've already dedicated one post entirely to them back in November and they've been seen in an English Vicarage, a teen girl's bedroom, and a victim of the week's bedroom. I now have a whole post worth's more.

Up first is Coupling which ran in the UK 2000-2004 (which makes this my earliest spotting). In Patrick's apartment there is an ORGEL floor lamp. It isn't there in every episode so it was much more obvious to me when I saw it in the 4th episode of season 2, the excellent "The Melty Man Commeth". 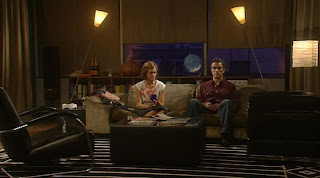 Staying with UK comedy we look at The IT Crowd (2006 -). In season 2 episode 4, Jane is holding a dinner party at her apartment. In the dining area is an ORGEL VRETEN. 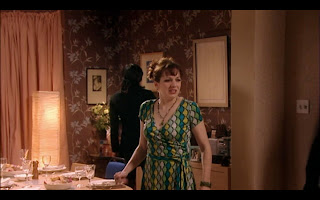 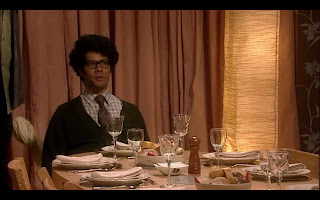 Later in the 1st episode of season 3 we see Jane's apartment again but it has been rearranged. There is an ORGEL table lamp on the hall table. 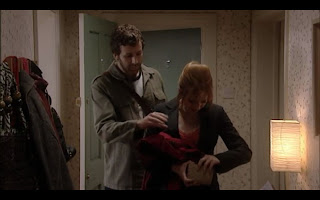 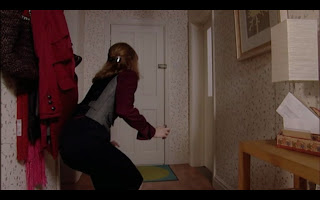 In Jane's living room (season 3 episode 5 ) there is an ORGEL floor lamp. (Incidentally, this is what I look like when I am doing screencaps, deciphering my scribbles and writing posts late at night.) 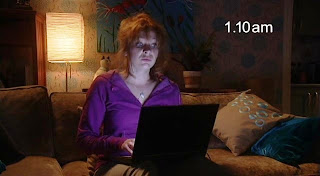 In a guest character's bedroom (season 3, episode 6) an ORGEL table lamp on the dresser. 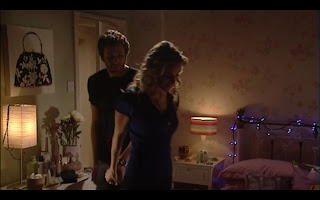 Switching gears to an US drama, let's spy on Veronica Mars. In episode 3, season 2 we get a glimpse into Logan's ransacked bedroom. There is a toppled ORGEL floor lamp and a table lamp on the floor. There is also a HOPEN nightstand (discontinued) by the bed. 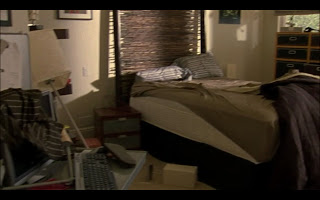 A slightly clearer shot of the two lamps. Our intrepid high school private eye reset the table lamp back onto the nightstand. 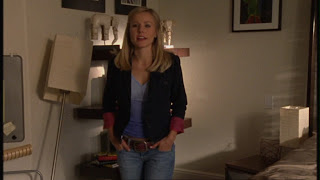 In a guest dorm room seen in season 2, episode 6 there is an ORGEL VRETEN by the window. Also, on the desk behind Veronica is a BOALT cd rack. 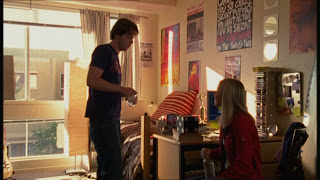 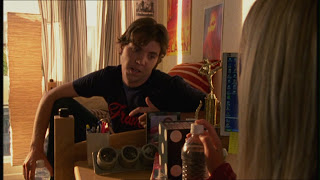 Besides the ORGEL lamps, Veronica Mars has a week's worth of posts for all the things I found.

Where have you seen an ORGEL lately?
Posted by IKEA Spotter at 7:00 AM