One of the drawbacks of this IKEA spotting illness I have is that sometimes it is hard for me to get absorbed in a movie or show because my brain instinctively starts scanning the scene looking for something IKEA. Fortunately, when I went to see Harry Potter and the Deathly Hallows in November I thought I would be in the clear. Certainly neither the Burrow nor Hogwarts is going to have anything from IKEA. True, they don't but unlike previous movies Deathly Hallows takes place in more muggle locations which do have spotting potential.

When I first saw the movie in the theaters I noticed the shelving in the cafe and thought they looked promising. 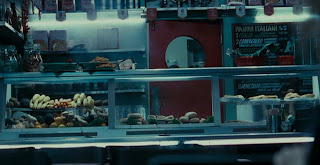 I believed those shelves to be EKBY BJÄRNUM line. The brackets raised the flag on this. 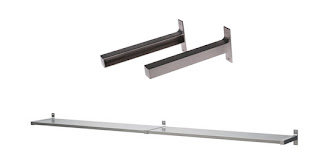 One of the things I love about IKEA is that they have less expensive versions of other items. When it comes to shelving it is sometimes a judgement call. In a scene like this, where everything is cluttered and in the background I couldn't say for sure. Unless something is distinctly IKEA or I have a second reference to support it I try to avoid making definitive statements.
It wasn't until I brought home the DVD and began watching the behind the scenes featurettes that I felt I was on to something.

While watching the Death Eaters Attack the Cafe featurette I saw quite clearly behind the stunt double 2 black SPONTAN magazine racks. 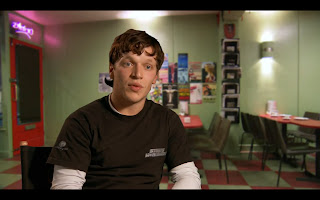 Also, a little extra trivia, the poster directly over his left shoulder is from EQUUS; the play Daniel Radcliffe did on Broadway. You may have heard about it because he was naked. I saw it.

Here's a shot from the same featurette showing the SPONTAN close up. 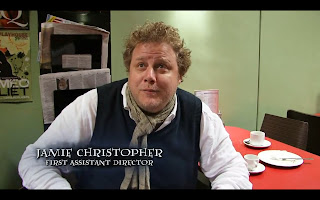 Now, in the movie itself, it is much harder to spot these because they are on the wall opposite of all the action. Determined however I switched over the the movie, warmed up my pause finger and set out to get a shot from the movie itself.

And there it is, on the left side of the frame. This scene is very action packed so the edits were quick but I got lucky. Upon further review of the scene I am pretty confident that the above shelves were indeed Ekby BJÄRNUM. Who would have thought I would find IKEA in the world of Harry Potter?

One last thing - although not from the movie I did spot something in another featurette. In the make-up trailer during The Return of Griphook featurette there are TROFAST storage units. 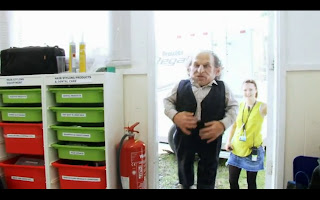 Even the professionals recognize the practicality and usefulness of IKEA.
Posted by IKEA Spotter at 7:00 AM