On Friday I had to babysit my niece because she was home sick from school. She is obsessed with Buffy the Vampire Slayer so that is what we watched. (Could have been worse I suppose.)  We were watching Season 7 which debuts the new Sunnydale High and gives Buffy employment as a guidance counselor.

The guidance office, where Buffy has her new desk and the principal's office are chock full of IKEA goodness. Season 7 aired 2002-2003 so some of the GALANT system shown in the following screencaps have been discontinued.

Seen here is the SPONTAN magazine rack which is used to hold her files. 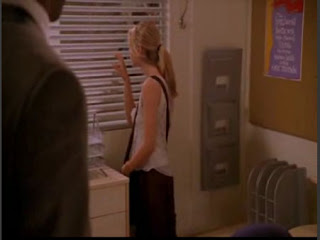 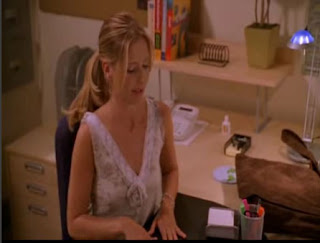 A full view of the desk itself with KNÖS desk pad. 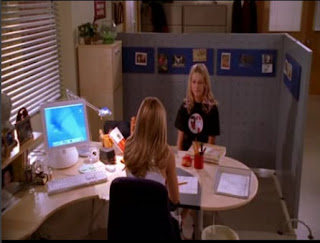 The waiting room has a SPONTAN magazine rack and LACK end table. 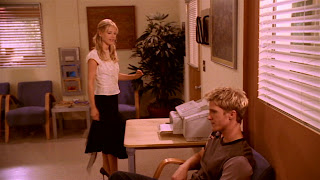 The principal's office with full GALANT desk and wall cabinets. 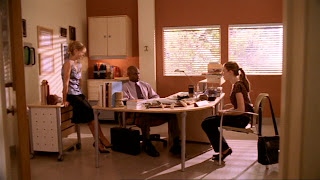 The conference table in his office has JULES chairs. 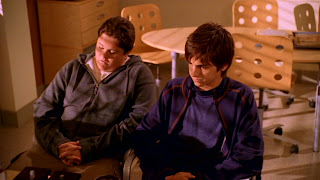 What threw me off at first was the fact that the desks & tables used VIKA KAJ legs with the GALANT desktops. Both GALANT legs & the VIKA KAJ are adjustable but GALANT A is angled.


I personally like the straight legs a little better. The result are nice clean looking offices. You would not guess that they sat 15 feet above a Hellmouth.
Posted by IKEA Spotter at 9:24 AM