How to demolish a KLIPPAN.

Sundays are my days to do something outside of the usual spotting posts. Sometimes it's video challenges or music. Today it is destruction.

Nothing quite says fun like demolition. I recently got a new couch and had to find a way to get my old KLIPPAN sofa out of my apartment. Instead of waiting for someone to help me carry it out of the apartment and then find some way to dispose of it I decided the most practical solution was to tear it apart. Okay, maybe not practical but it was fun!

I bought my KLIPPAN years before it was redesigned so it came in one pre-assembled unit. I had no idea what it would be like to take apart. However, it was used and abused a great deal during its life so it made sense that it would not have a quiet death. 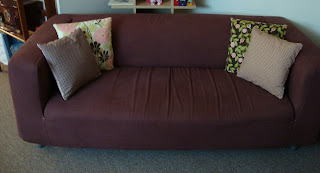 Here I am just cutting off the canvas cover. Inquisitive bunny was safely locked in his room before any major destruction occurred. 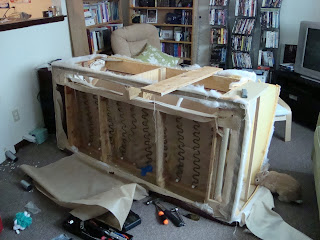 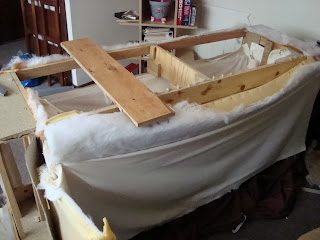 The arms came off rather easily. The back separated from the seat frame after leveraging out many staples with a chisel & hammer. (Some brute force may have been applied to break the wood as well.) 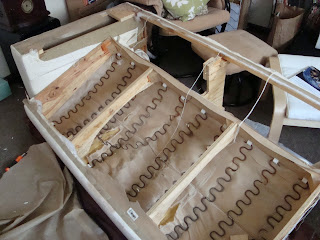 After cutting through canvas & foam, splintering particle board and ripping off carboard I was left with 4 pieces. Two arm frames, seat frame including springs, and the long frame making up the back of the couch. I was able to get the pieces in my car and covertly dump them in a nearby dumpster. I saved the foam from the seat back to reuse for another project.

It was a nice way to get out some aggression, work up a sweat and reveal the guts of a sofa. Surprisingly injuries only consisted of minor scratches and no blood was drawn. That is a couple of hours well spent.

Back to our regularly scheduled program tomorrow.
Posted by IKEA Spotter at 7:00 AM

Email ThisBlogThis!Share to TwitterShare to FacebookShare to Pinterest
Labels: Klippan