IKEA in every HOUSE


When a pilot is filmed the producers have to make an important decision on how much of their budget they will spend on set designs. Spend too little and your show looks cheap or under developed. Spend too much and you risk wasting a lot of money of a show that may or may not actually make it to air. Once shows get picked up the producers feel comfortable to add to the sets. Things can get changed radically or they simply do a little tweaking.

House was such a unique concept with a misanthropic, anti-heroic lead that it could have easily gone either way. Lucky for us the show got picked up and became a success. Not only do we get to be amazed by Hugh Laurie every week but the set is filled with tons of IKEA goodies.

In the pilot episode the sad looking kitchenette attached to the differential area was made up of a lone ATTITYD drawer unit, LUFTIG exhaust hood, and NYLED rail with utensil caddy and dish rack. I believe the sink cabinet is the VÄRDE but I cannot tell if the frame is metal or the wood is painted to look aluminum. 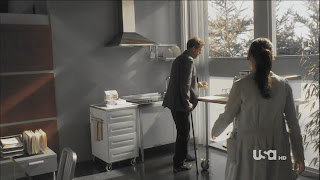 Pilot
In episode 2 the ATTITYD unit disappeared and they added more NYLED items and many other set decorations to make the area look much more lived in. This is a clear shot from episode 3 showing the additions. 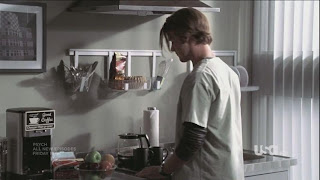 source
The NYLED kitchen organization line was discontinued in 2006 to make way for the ASKER series.  The image above shows items that were offered for the NYLED system.
For the premiere of Season 2, the kitchenette was revamped again. The sink unit remains and 2 metal (or painted to look metal) cabinets with frosted glass doors are added. Does anyone know the name of these? The metal look is throwing me off. The NYLED has been removed and a shelf was added. The shelf is made with 2 EKBY BJÄRNUM brackets and an EKBY MOSSBY shelf. 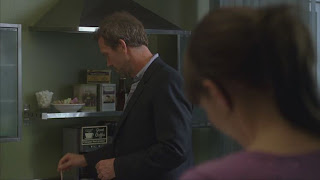 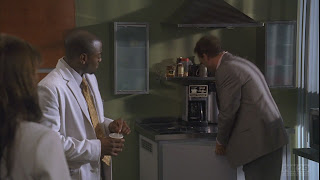 This set up for the kitchenette has continued through to the current season.
Season 2 also saw some changes to House's office and the differential area. Two EXPEDIT units were added to House's office along the glass wall. A 2X4 and 2X2 unit, both on casters and painted silver, again to match the overall aesthetic of the office. 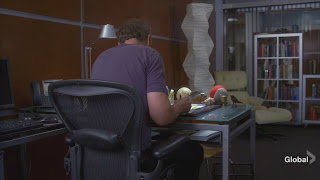 Painting or otherwise refinishing a bookcase that already has a foil finish takes a bit of work. I envy the production crew for their ability to do this modification to the EXPEDIT units. They obviously have a proper workshop with all the fancy supplies needed to do this with relative ease.

The scenic designer must have liked this look because in episode 3 the same addition was added to the differential area. This time however the units were doubled to fill a larger wall. 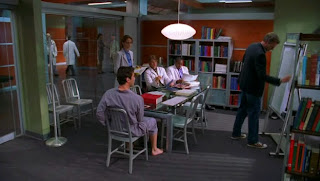 Season 2, Episode 4
Prior to this change that wall was covered by some awkward and plain looking cabinets. 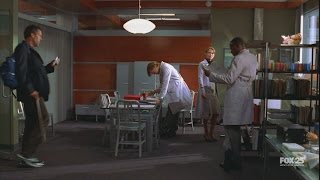 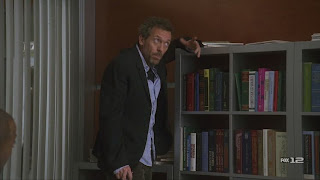 “You can think I'm wrong, but that's no reason to quit thinking.”
I have only touched on one set. There is much more IKEA goodness throughout the seasons of House. Stay tuned.
Posted by IKEA Spotter at 9:10 AM