"This right here is why Sweden has no space program."

Even someone who isn't a hardcore IKEA fan can't help but notice the mecca of IKEA set dressing that is Penny's apartment on The Big Bang Theory. In the second episode of the first season we get a really good look at Penny's IKEA haven. It is like an IKEA catalog exploded and it is marvelous.
We spend much of the episode in Penny's apartment because she has asked the boys to sign for furniture she is having delivered. The large box which the boys vainly attempt to carry up four flights of stairs contains a flat packed “cheap swedish media center”. 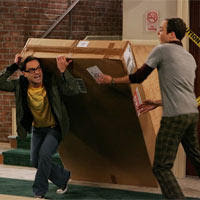 Hilarity ensues as compulsive Sheldon sees the messy state of her apartment and then later as the boys attempt to assemble the media center, disregarding the “pictographic representation of the least imaginative way to assemble these components.” 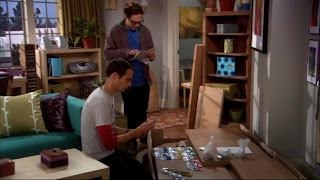 We get a wide view of Penny's apartment where we can easily take inventory of all her IKEA possessions. (To see more detail, click the pictures for a larger version.) 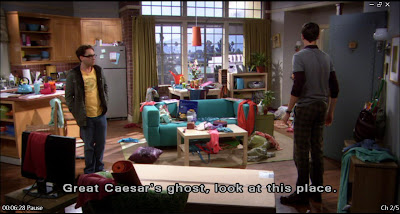 She has an older Klippan sofa, a Lack coffee table, Nordmyra chairs (The backs and seats have been painted purple), a Bjursta dining table and VÅLLÖ watering can. 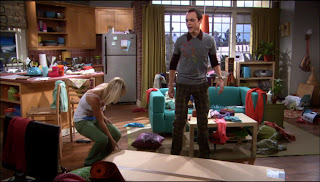 The pendant light above the Bjursta  is an IKEA 365+ LUNTA. 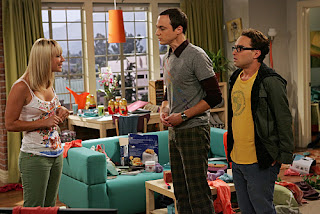 Later on in the season we get a better view of her Skruvsta chair. What I love most about Penny's apartment are the modifications the production team made to the furniture to make them fit her personality. The painting of a chair or the dying of a slipcover are all simple ways to take the basic functionality of an IKEA product and make it personal. If you are an Ikea Spotter then I'm pretty sure you are an IKEA Hacker as well. The versatility of products is one of the many reasons why we love IKEA so much.